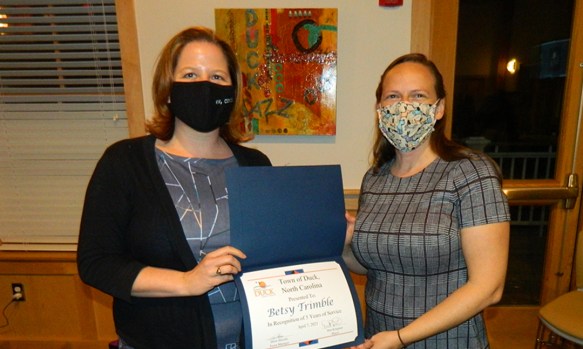 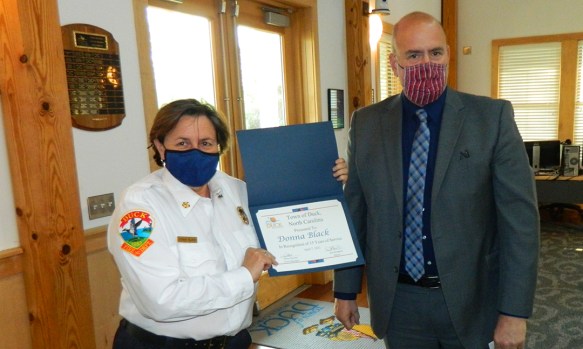 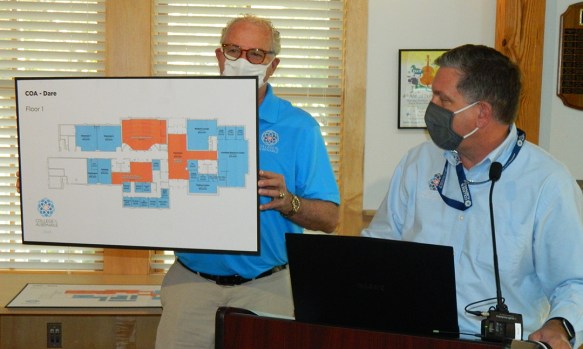 Dean Tim Sweeney from the Collage of The Albemarle holds up a layout of the new COA building under construction in Manteo while COA President Dr. Jack Bagwell provided details about the project. Philip S. Ruckle Jr. photo

Duck Town Council at its April 7 regular session meeting recognized two employees for their services to the town.

First of the evening’s recognitions went to Fire Chief Donna Black, who was commended for her 15 years of service with Duck. Also singled out for her  five years with Duck was public relations special events assistant Betsy Trimble.

During the recognitions, Mayor Don Kingston advised that Duck employees are recognized for their employment with the town at five year intervals and as a part of the program, in addition to being recognized at a council meeting, each person receives a certificate and a gift certificate from a Duck business.

In a different type of presentation, College of The Albemarle President Dr. Jack Bagwell and dean of the Dare Campus Tim Sweeney gave council a brief overview of college programs and the current construction project in Manteo. During the presentation, Bagwell reminded listeners that the college, now 60 years old, has four campuses serving seven counties and has the number one ranked nursing program in North Carolina.

When asked if dorms are to be included in any future plans, Bagwell advised that it has been discussed, but there are no current plans for any dorms.

Moving through the agenda to the public hearings scheduled for the night, a request to establish a one-bedroom apartment above existing retail space at the Soundside Shoppes at 1180 Duck Road was rescheduled for September.

Following an initial approval on that request by council in March, adjacent property owner Phil Morgan with the Seagreen Gallery provided comments within 24 hours that put the request back on the agenda for additional discussion. In an apparent attempt to overcome Morgan’s concerns, both applicant Belinda Pleva and Morgan asked that the issue be deferred until September 1.

The second hearing centered on adding fill of up to ten feet to areas of the property at 111 Bayberry Drive.

According to Joe Heard, director of community development, there is evidence that in past years the site had been used as a borrow site with enough sand removed to create a bowl effect as much as 12 feet deep. The owners simply want to add enough off-site fill material to plug the hole and raise the property elevation to be in line with the adjacent property at 113 Bayberry Drive. The site would still be about one or two foot below the height of the roadway.

With very little discussion, council gave unanimous approval to the request, provided there are no negative comments received within 24 hours, as did the Duck Planning Board back in March.

The final hearing for the evening was by Doug Kraus for a conditional use permit to convert Units C4 and C9 of Scarborough Lane Shoppes, previously occupied by The Sweet Duck, from existing retail space into a 28-seat restaurant.

According to Heard, the structure at 1171 Duck Road that was constructed in 1995 and expanded in 2002 is actually on two properties totaling just over four acres. Functioning together as a single development, there are 34 commercial units in four retail buildings. Although the change in use requires a minor increase in parking – from 165 to 167 spaces – the site already has 176, which is more than the minimum required.

The conditional use permit request was also approved subject to the 24-hour comment period required for video/virtual meetings.

In other business for the night, Nancy Caviness was selected as a town representative to the Albemarle Commission’s Regional Broadband Initiative Working Group and town manager Drew Havens presented several financial policies for council’s review and consideration for possible adoption at a future meeting.