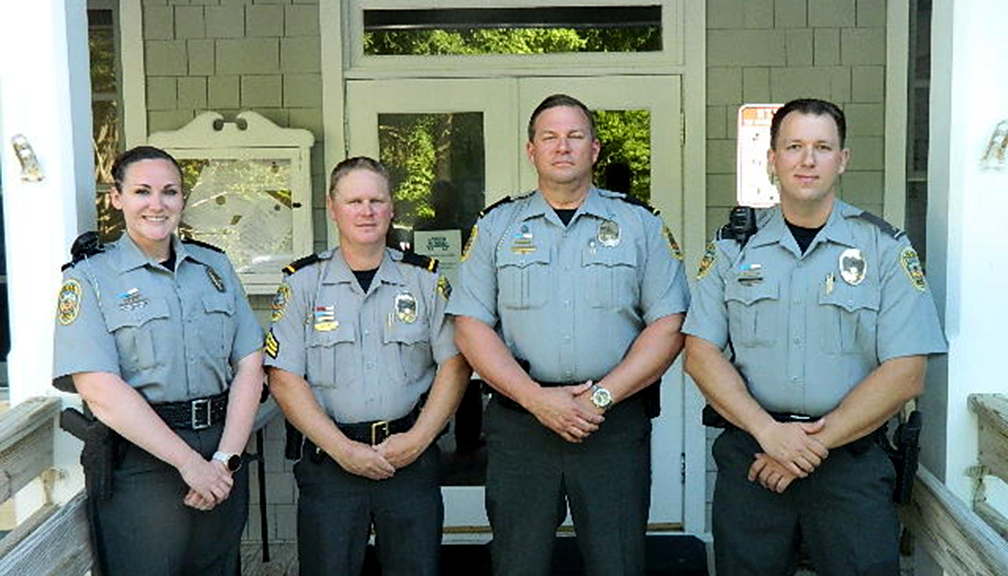 Among the first agenda items for the night was the introduction of two new town employees. During the introduction, Police Chief Joel C. Johnson advised council that Police Officer II Amy L. Heckhaus is originally from Maryland, has worked in New Mexico and has family ties to the area. Also new to Kitty Hawk is Police Officer III Brandon M. Rutherford, who has prior police experience in Virginia and also has family ties to Dare County.

After announcing the two new hires, Johnson recognized Sergeant James D. Helms for earning his 10 year service award. A native of Currituck, Helms started as police officer I and worked his way up the ranks and now handles many of the department’s administrative duties.

Next on the agenda was a presentation on the town’s beach and dune maintenance program by Ken Willson, senior project and program manager for Coastal Protection Engineering of NC, Inc. Willson’s 40 minute talk focused on explaining some of the results from recent surveys that might provide guidance on setting up the next nourishment project. Included in his talk were recommendations or suggestions on how to maximize sand placement, dune fence placement, repairing about 800 feet of dune near Sea Dunes, adding vegetation in the project area and improving public access crossovers.

Even without a tax increase, Stewart said there is a two percent step increase for full and part-time employees, money for a new police, fire/EMS substation, an expansion of the police and fire career ladder positions. Also included is an increased stipend for the mayor and town council members, the first pay adjustment in 20 years.

Stewart also advised that a step toward building a new police department and fire/EMS substation on US 158 was for an Architect Review Committee review of seven proposals to provide services. To review and rank potential architects the selection committee of Jennie Collins (Dare County EMS), Joel Johnson (police chief), Mike Talley (fire chief), David Lewis (chief building official) and Stewart narrowed the list to three and interviewed someone from each of the three firms earlier this month.

By voice vote, council approved the list and authorized staff to negotiate a contract with Manns-Woodward Studios or, if unable to reach an agreement, to continue down the list.

Other business for the evening included Planning Board regular term reappointment for John Richeson, Jim Geraghty and Chuck Heath with Richeson as chair and Bryan Parker as vice chair. Matt Spencer was reappointed as a Planning Board alternate and Blair Meads was named to fill a vacant alternate seat. For Board of Adjustment positions, it was Christine Buckner, Blair Meads and Natalie Smith who were reappointed to regular seats and Kip Tabb was reappointed as an alternate member. Completing the round of appointments, councilwoman Lynne McClean was reappointed to represent Kitty Hawk on the Dare County Land Transfer Tax Appeals Board.

Items approved in the consent agenda include March 15, April 26 and May 3 council meeting minutes, a personnel policy amendment to allow retirees to add dependent children to their health insurance plan, a resolution for receiving federal funds under the American Rescue Plan Act and the transfer of $704,000 from the Capital Reserve Fund for the payment of a new fire truck.

Rounding out the evening’s business, council set a July 6 public hearing on a subdivision variance request that will allow creating a buildable lot on Hornbeam Road smaller than minimum required for that zoning district.