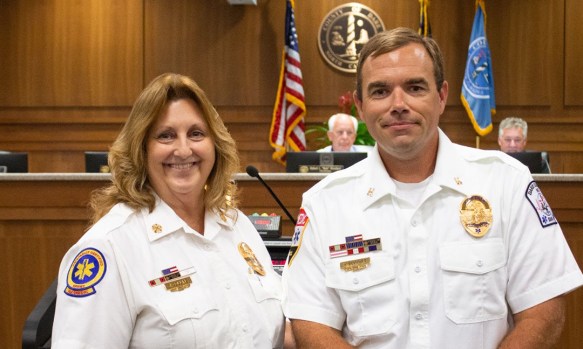 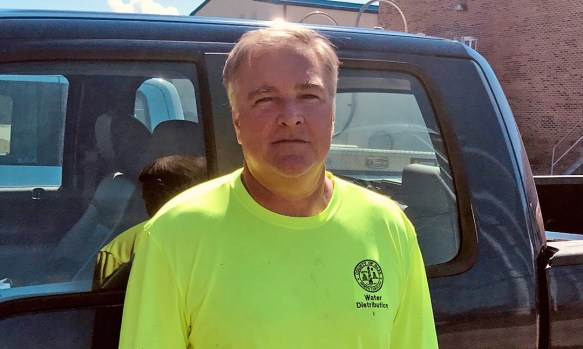 Jerry Allen, a distribution system specialist for the Dare County Water Department, was recognized with a service pin recognizing his 25 years of service. Courtesy Dare County 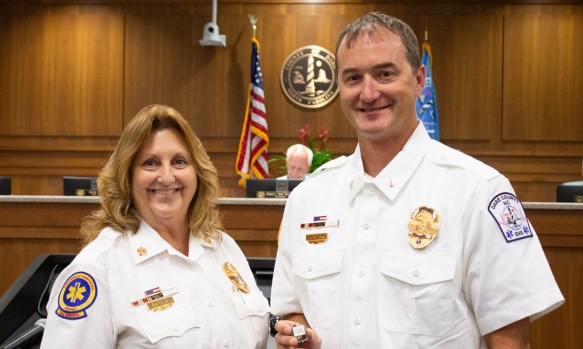 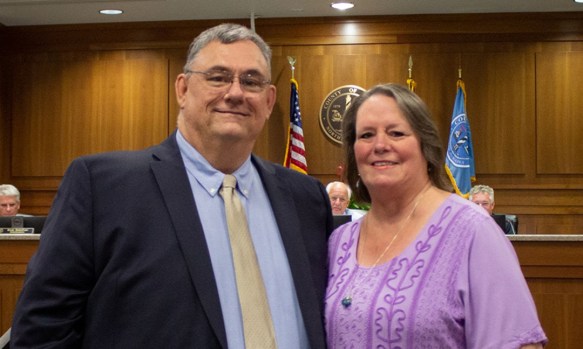 Four Dare County employees were recognized with a service pin presentation at the Dare County Board of Commissioners meeting held Monday, July 19.

Stephen Burritt, a captain with Dare County EMS, was presented with a service pin in recognition of his 15 years of service to Dare County. Burritt initially began working for the county as an electrician II for the Buildings and Grounds Division of the Dare County Public Works Department.

While serving as a volunteer firefighter with Roanoke Island Volunteer Fire Department, he became interested in a career in EMS, so he obtained his advanced EMT certification and transferred to Dare County EMS in September 2009.

In December 2010, he obtained his paramedic certification and was assigned to Dare MedFlight in July 2012, where he served as a flight medic. Burritt was promoted to lieutenant in August 2015 and served in the role of MedFlight lieutenant. During that time, he began elevating the professional qualifications of the department’s MedFlight paramedics and in the pursuit of meeting industry standards, Dare County EMS added flight paramedic certification as a requirement.

According to Collins, Burritt also played an instrumental role while serving on Dare County EMS’s first ambulance design committee and brought his keen eye for detail to the project. In July 2018, Burritt was promoted to the rank of captain. In addition to being in charge of his 24-hour shift, Burritt also coordinates facility issues by serving as a liaison between Dare County EMS and the Buildings and Grounds Division of Public Works. He is also responsible for coordinating the maintenance of medical equipment.

Burritt resides in Manteo with his wife Kristen and 20-month-old son Carter. In his free time, he enjoys going fishing year-round and in all types of weather.

Timothy Langanke, a lieutenant for Dare County EMS, was presented with a service pin commemorating his 10 years of service to Dare County.

Langanke is originally from Missouri but moved to Hyde County, where he attended high school. After graduating from high school, he pursued a career in EMS and earned his EMT certification at College of The Albemarle.

In July 2011, Langanke was hired by Dare County EMS as an advanced EMT and in December 2015, he obtained his paramedic certification. In December 2018, he was promoted to lieutenant.

In addition to his normal lieutenant responsibilities and operating a quick-response vehicle, Langanke also assists with helping the captain who oversees Dare County EMS fleet maintenance by assisting with maintenance scheduling, vehicle tracking and recordkeeping. He also assists the training section by coordinating with personnel who are in need of recertification requirements and skill assessments.

Working in her role as an advocate for victims of violence and/or abuse, Hutchison performs many duties, including accompanying victims and witnesses to court proceedings, responding to crime scenes and hospitals as needed, attending and observing interviews of child sexual assault victims, referring victims to the appropriate service support agency where they can receive assistance, disseminating the appropriate forms to victims and assisting victims with form completion and developing and disseminating victim assistance information, among other tasks and responsibilities.

During his presentation, Doughtie emphasized the integral role Hutchison plays in her position, as well as the positive impact it has on the victims for whom she advocates, particularly those that she accompanies when they face a challenging situation, such as making a court appearance.

“It’s kind of like going to the doctor – and you don’t really want to go, but you’ve got to keep yourself healthy. Gail is like the person that, even though you’re going somewhere you don’t want to go, she made that road a whole lot easier to bear. I guess you could say she turned it from a dirt road to a paved road and made things a whole lot easier.”

Doughtie also highlighted the fact that Hutchison’s efforts go well above and beyond the details of her job description and her required daily duties.

“She doesn’t only do the victim’s advocate stuff that we truly hired her to do,” Doughtie said. “She does a lot of stuff for me. She’s on a lot of boards [so] that I don’t have to go and comes back and reports, which frees up my time, which is really, really nice. And I trust her to go in there – as she has done for the many, many years that she’s done it. She makes sure that things are done right and comes back and keeps me informed and does the right thing every time. We’re ecstatic that we have Gail. She’s really, really good at what she does and very knowledgeable about the people and places that she represents. What a difference she’s made to us.”

Jerry Allen, a distribution system specialist for the Dare County Water Department, was recognized with a service pin recognizing his 25 years of service.

Allen began working for Dare County in July 1996 and had the responsibility of operating the wastewater facility. He later transferred to the Stumpy Point Wastewater Treatment Plant when it began operations in 2008.

He recently transferred to the Water Distribution Department. Allen holds state certifications for Wastewater Collection System 1 and Biological Wastewater 3. According to his colleagues, “Jerry is never hesitant to assist coworkers during their daily operations or in getting work accomplished.”