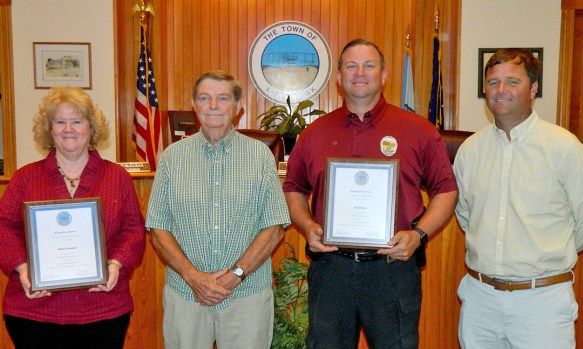 Sharon Davenport, left, and Joel Johnson, second from right, were recognized for completing 25 and 20 years of service with Kitty Hawk at the Town Council's August 2 regular session meeting. Davenport is a police administrative records technician and Johnson has served as police chief for the past nine years. With Davenport and Johnson are Mayor Gary Perry and town manager Andy Stewart, far right. Philip S. Ruckle Jr. photo 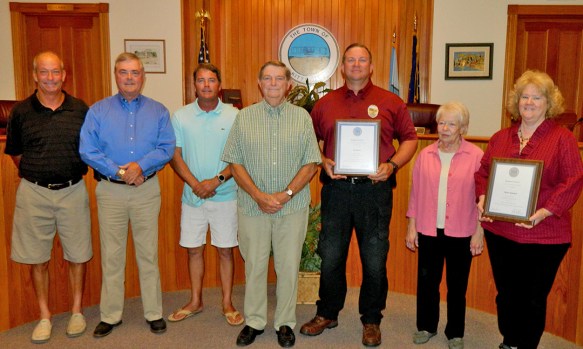 Sharon Davenport, far right, and Joel Johnson, third from right, were recognized at the Town Council’s August 2 meeting for completing 25 and 20 years of service with Kitty Hawk. Davenport is a police administrative records technician and Johnson has served as police chief for the past nine years. With Davenport and Johnson are Town Council members, from left, Jeff Pruitt, Craig Garriss, David Hines, Mayor Gary Perry and Lynne McClean. Philip S. Ruckle Jr. photo 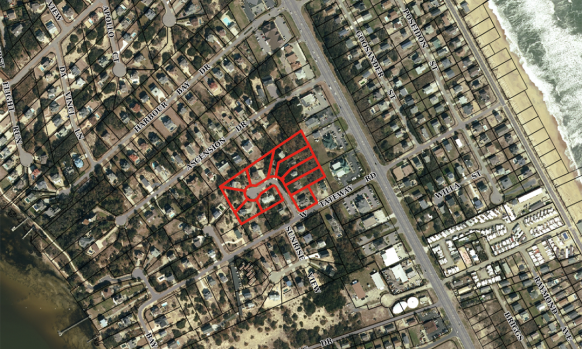 A larger than normal crowd gathered August 2 for a Kitty Hawk Town Council meeting to witness the recognition of two town employees.

With family, friends and a host of co-workers looking on, Kitty Hawk Police Chief Joel Johnson led off the presentation of service awards with an announcement that police administrative records technician Sharon Davenport has been with the town 25 years.

Calling her a foundation of the department, Johnson said Davenport started as data entry clerk, although her duties also included painting the trim at the former post office building when it became the current police station.

Johnson said he estimates Davenport now enters more than 10,000 documents per year. In addition to that work, she helps with the budget, sets up employee computer systems and is also known to be an excellent cook.

The next recognition was for Johnson and, according to town manager Andy Stewart, Johnson has now completed 20 years with Kitty Hawk.

Stewart said Johnson started his career with Kill Devil Hills in 1989 and had the “good sense” to come to Kitty Hawk as a patrol officer in 1999. Holding a bachelor’s degree in criminal justice, Johnson is a certified instructor and a graduate of the National FBI Academy. Working his way up the ranks, Johnson was promoted to sergeant in 2007 and in 2012 promoted to chief of police.

Stewart went on to say Johnson has been able to secure several equipment grants and performs a regular review and update of department policy in addition to many other activities not heard about on a daily basis.

In response, Johnson said he appreciated the confidence in him as chief and that he would like to be around long enough to see a new police department before he goes.

The only general public comments for the evening were from Rabbit Hollow resident Curtis Wilton Baskette Jr.

Baskette said he has been before council for 30 years on the same subject and was disappointed that a project to fix a persistent flooding problem on Tateway was terminated.

After asking for more details on the reasons why the town abandoned the project, Baskette said “I have talked with Dare County commissioners who have agreed to work with us to get state involvement in the project. I would like to think the town would participate in that.”

In June 2020, Kitty Hawk approved stormwater drainage improvement work for the area around Rabbit Hollow. The plan was to help move any excess water during heavy rain events. It was also pointed out that additional pumps in that area will not fix everything, but should be a major help. However, when opposition surfaced from at least two area landowners, Town Council elected to terminate the project.

In response to Baskette’s comments Monday, Mayor Gary Perry said he thought there had been an answer and Baskette advised that he had a response letter from the town attorney.

“There is an answer on why the town stopped,” said Perry, “but I’m not sure what can legally be said about it.”

After the meeting, Stewart explained that the flooding in that area is actually a private property issue. And, although the town can pump enough excess water off roadways to enable emergency vehicle access, environmental guidelines allowing that removal are rather restrictive.

The combination of private property rights, area wetlands and environmental restrictions for the area pose a limit on the available options for managing stormwater near Rabbit Hollow.

“There may be options, but they would be limited,” said Stewart.

After removing the appointment of a Recreation Committee liaison from the night’s agenda for discussion at a later date, the only other business for Monday’s meeting was approval of the July 6 council meeting minutes.