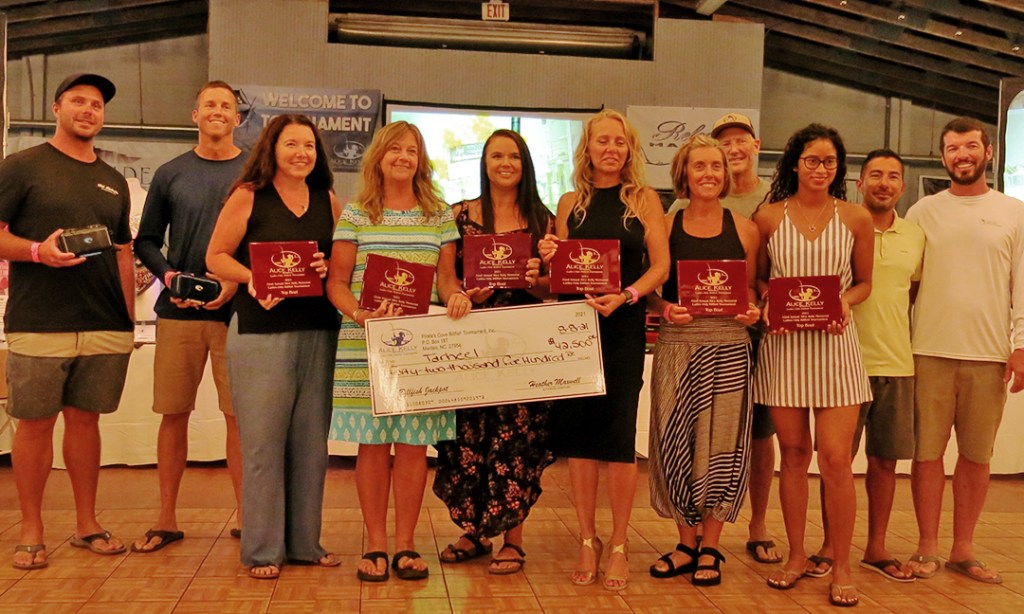 With a record 145 boats and nearly 900 lady anglers, the 32nd annual Alice Kelly Memorial Ladies Only Billfish Tournament set new standards for charity fishing events. This popular North Carolina contest, held in Manteo at the Pirate’s Cove Marina, is special not only for its purpose but for also for sheer enthusiasm and passion for the sport. That spirit was on full display at Sunday night’s award’s ceremony as Tarheel was presented with the top team honors.

With Capt. John Bayliss at the helm of his 62-foot custom Bayliss Tarheel, teammates Tiffany Day, Carson Flatt, Mandy Savage and Theresa Honeycutt, all Outer Banks locals, released one blue marlin and three whites during Sunday’s fishing. In addition to the Top Team trophy, Tarheel also won the winner-take-all Billfish Jackpot prize of $42,500. Day earned the Paula Stansky Award for Angling Excellence for her blue and one white. Jorge Carrillo and Moose Skjaerpe are the mates aboard Tarheel.

“Today was my first time offshore and I released my first billfish,” said Honeycutt. “It was a beautiful day and the crew was absolutely amazing. I’m ready to go again next year.”

Bi-Op-Sea, a 59’ Spencer Yacht based in Manteo, was named the second-place boat based on two blues and one white marlin. Wendy Hayes and Danielle Stine scored the blues, while Cara Sumners added the white. Capt. Jesse Granitzki runs the boat, with Chris Stine working the “pit.” Kay Hall, Mary Dembosky and Taryn Hall were also part of the team.

The heaviest tuna was caught by Laura Midget aboard Al’s Gals, a 53’ Omie Tillet. That yellowfin tipped the scales at 47.7 pounds. Allison Spencer, competing on Small But Reel, a 20-foot Maycraft center console, boated the only wahoo of the day, a 24-pounder. Multiple dolphin were weighed in, but Anna Daniels scored the top bull, a fish that weighed 30.3 pounds. Daniels and her family team on Yellowfin, a 56’ Buddy Cannady, won the dolphin jackpot prize of $51,850 for that catch. Jeff Garner runs the Yellowfin and mates Hunter Garner and Jack Huddle share cockpit duties.

“This was my first time fishing the Alice Kelly,” Daniels explained. “I also released a white marlin and my sister released one, too. My boyfriend was one of the mates and his dad ran the boat, so we had a great team.”

Named after a passionate local angler and victim of breast cancer, proceeds of this memorial event go to the Interfaith Community Outreach – Cancer Program to help support Outer Banks women afflicted with the disease. Based on entry fees, $16,650 will be donated to that organization, with more donations still being collected.

“The ladies knocked it out of the park this year to support a really great cause,” said tournament director Heather Maxwell. “The Billfish Jackpot was a huge success and thanks to our sponsors, the Oregon Inlet charter fleet and all the teams, it was a fantastic event. We raised a lot of money for the Outreach program and they assist a lot of local families. Plus the weather was gorgeous, we had some quality fish and fun times. So we look forward to welcoming everyone back to celebrate our 33rd anniversary next year on August 13-14, 2022.”