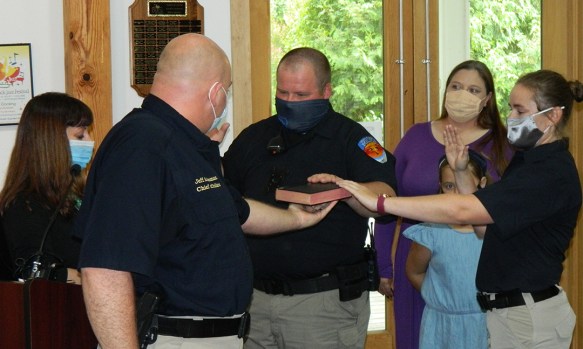 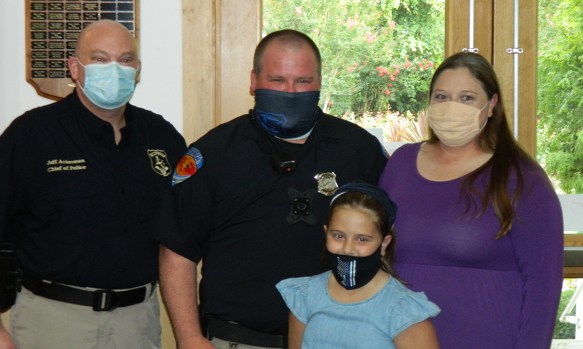 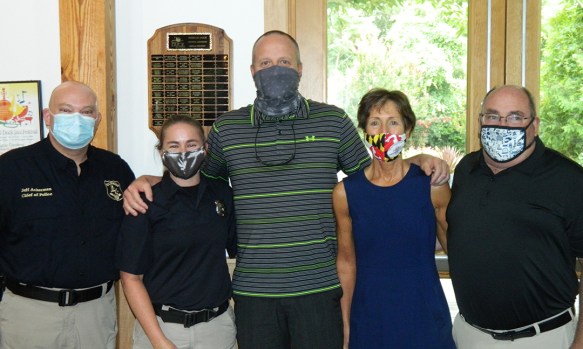 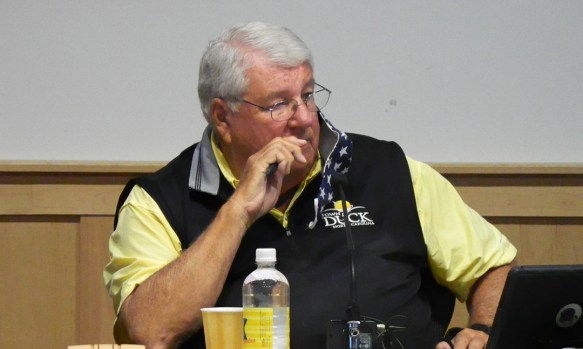 According to Ackerman, Mauffray is originally from Columbia and graduated from Beaufort Community college 2010. He comes to Duck with 11 years prior service as a deputy in Tyrrell, Washington and Dare counties.

Ackerman then explained that Hill, who has worked the past six years with the Dare County Sheriff’s Office, grew up in Maryland and graduated with a B.S. degree from Eastern Connecticut State University.

Among the regular business items for the night, council authorized town manager Drew Havens to execute an installment purchase agreement for five police vehicles and associated portable radios for the police and fire departments.

Havens explained that three vehicles are replacements and two are new patrol vehicles for two new positions with funding to be through an installment purchase agreement amortized over a three year period. All are included in the FY 2021-22 budget.

According to Havens, of the five replies from lenders that came in, Bank Funding, LLC, a lending broker, submitted the lowest cost proposal of 1.13 percent with the loan to be placed with a lender prior to closing. PNC Bank was next lowest with a 1.22 percent rate.

Havens went on to say, however, although using Bank Funding would save money over a three-year loan period, he recommended using PNC since little is known about the former. In addition, the request for proposals specified that Duck was looking for a direct lender, not a third-party broker who works with a number of banks.

Council later entered a lengthy discussion on a request to appoint a Town Council member to serve as liaison to a group that has no formal membership, no formal meetings and no dues.

Town documents indicate that Ron Blunck, president of the Carolina Dunes Association, founded the Duck HOA Forum in 2020 to facilitate communications between all HOAs and/or subdivisions within the town. After Town Council members met via Zoom with Duck HOA members recently, the HOA requested a more formal avenue of communication between the forum and the Town Council by having a member of council serve as a liaison to the forum.

Although Rob Mooney said he felt this was a significant group and that council should not drag its feet establishing a liaison, Mayor Don Kingston said he was concerned that doing so would open the door to any and all other groups in town to request a similar communication link. He went on to say anyone can always contact any council member and there has always been a response when contacted.

An alternative that gained council support was from Havens that he and a couple of council members meet with Duck HOA Forum and provide guidance on communicating with Town Council.

After the terms for all five Board of Adjustment members expired this past July 1, council was faced with the task of reappointing previous members to the BOA or selecting a slate of new members, including two alternates, for terms to expire on July 1, 2023.

Also approved as part of the evening’s consent agenda were June 16 mid-month meeting minutes, a resolution revising town personnel policies, a $19,000 audit contract with Johnson, Mizelle, Straub and Murphy, LLP for a FY 2021 audit and a new legal services contract with the legal team of Hornthal, Riley, Ellis and Maland that includes a $2,800 monthly retainer fee and specific hourly rates for any additional legal services not covered by the retainer.

After public comments critical of a July Dare County court case in which one misdemeanor assault charge was dismissed and deferred prosecution was entered into for a second charge for former town manager Chris Layton, Duck Fire Chief Donna Black, speaking as citizen of the town, said it was a tragic event and while she was as sickened as everyone else, there is always more to any story. She then cautioned others to know all the facts before judging someone.

Among the other items discussed at Wednesday’s meeting were concerns over the volume of traffic through town, safety at pedestrian crossings in the village, congestion and significant traffic delays and legislation updates for emergency proclamations.

Council ended the evening with a closed session to discuss an employee matter.

The next scheduled Duck Council meeting is a regular session meeting at 6 p.m. on Wednesday, September 1.