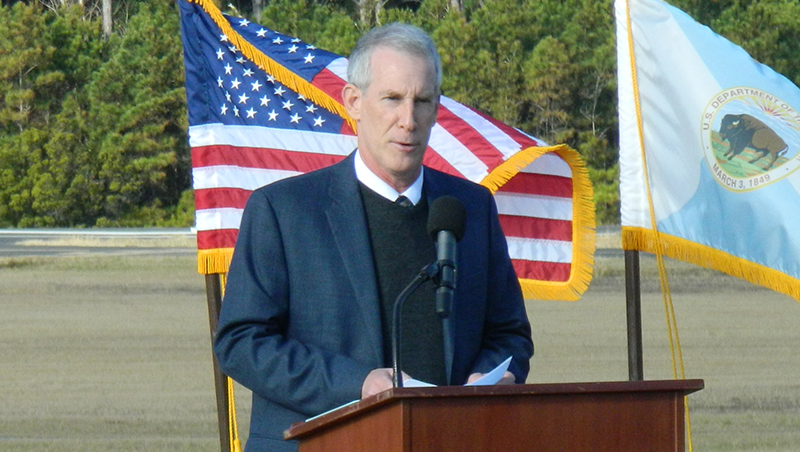 North Carolina Department of Natural and Cultural Resources Secretary D. Reid Wilson was in the area December 17 for the 118th anniversary of the First Flight by Wilbur and Orville Wright. Following that ceremony, he offered a few comments on the new state budget. Philip S. Ruckle Jr. photo

While visiting the Outer Banks for the recent Wright Brothers celebration, North Carolina Department of Natural and Cultural Resources Secretary D. Reid Wilson took a few minutes to share his views on some of the items included in the $25.9 billion state budget that became law November 18.

“I think the Department of Natural and Cultural Resources did extremely well in the State of North Carolina budget process,” said Wilson. “There was money for everything from the zoo to the art museum to the Graveyard of the Atlantic Museum in Hatteras.”

Wilson explained that after seeking additional funding for several years, the Hatteras museum received $4.2 million to renovate the exhibits there.

“They had received some federal money earlier,” he explained, “and needed the 4.2 from the state to complete the work. And they finally got it.”

“It is good to see that Hatteras and the Outer Banks is now taking its rightful place in the maritime history of North Carolina,” said Couch. “That means all three maritime museums, Hatteras, Beaufort, and Southport, have parity across the board.”

Wilson went on to say the state’s Parks and Recreation Trust Fund received $91 million new dollars and several new positions funded for state parks statewide with some of that conceivably finding its way here to Jockey’s Ridge State Park.

“That’s additional money beyond what the trust fund already has,” Wilson continued. “And that means that more and more local communities will be able to have parks, ball fields, community rec centers, trails and greenways, which is tremendous. And Jockey’s Ridge will be opening a new visitor center soon so it will need people to be there for the increased visitors.”

Although there were some requests that failed to make the funding cut, like a program for teachers to bring their classrooms to state parks for a day of outdoor science education, America 250 planning for the celebration of America’s 250th anniversary of independence on July 4, 2026 and an African American monument on state capitol grounds, Wilson said there were still a number of other things that did get money.

Among them was the State Library with a $11 million increase in its grants program as well as $16 million new dollars to the Arts Council.

“That’s more money for local libraries in all 100 counties as well as money for grants to local arts councils and arts organizations and artists,” Wilson continued. “Some of that will filter down to the Outer Banks. And our historic sites received additional funding, particularly for maintenance, which is really important because our historic sites by their very nature are old and they need maintenance and upkeep repairs.”

Wilson said there was also funding that came to his department through federal pandemic relief funds with $5.7 million to aquariums to replace revenues lost during the pandemic.

“That is a big deal for the aquariums,” he explained. “Because they receive only a third of their budget from appropriations, and have to rely on ticket prices and other things for the other two thirds of their budgets. So all across the department, exciting things are going on.”

Wilson also took time to praise many of the state workers within the department.

“What’s really interesting,” Wilson offered, “is that our staff and volunteers – in spite of the challenges we faced – are doing a great job. And people that come visit are really happy to be there. We are the department of all the things people love about North Carolina and I think we are providing great visitor experiences for people whether it is a history museum, a state park or aquarium, things are going really great.”

Wilson then added that he thought the budget says that state leaders from both parties really understand the importance and value of their historic and cultural and natural resources.

“Overall it is a tremendous new budget,” said Wilson. “And now we need to spend it well and as wisely as we can.”

While there was considerable support for the final budget, with a 41-7 vote of approval in the Senate and passing 101-10 in the House, it was also the state’s first budget enactment since 2018. Overall it calls for spending $25.9 billion this year and $27 billion in the 2022-23 fiscal year. There also are several billion dollars more in federal COVID-19 relief aid. Although Governor Roy Cooper announced he considered the budget imperfect, he signed it, saying the good provisions in it outweigh the bad.

For the past several years North Carolina has operated on its $23.9 billion FY 2018-19 budget.

In addition to some of the budget items covered by Wilson, other provisions in the budget that became law November 18 include:

●  $300,000 to Roanoke Island Festival Park for lost receipt replacement.
●  $500,000 to The Lost Colony (Roanoke Island Historical Association) for lost receipt replacement.
●  $400,000 for building improvements at a regional public school.
●  $1.37 million for Tryon Palace living history museum complex improvements and operations.
●  Allocates $1 billion in funding for broadband initiatives with money to expand broadband availability in rural areas and to improve broadband access for 25 of North Carolina’s most rural community colleges.
●  $283 million to support deepening and expanding the Wilmington Harbor so larger container vessels can access the port.
●  $1.7 billion for in water, sewer and stormwater improvement projects across the state.
●  $500 million for the Small Business Recovery Grant Program.
●  $7.5 million for a new insurance program for firefighters diagnosed with work-related cancers.
●  Cuts the personal income tax rate from 5.25 percent to 3.99 percent over the next five years while also increasing the zero-tax bracket to $25,500 for married filers.
●  Eliminates the state income tax on military pensions for more than 100,000 retired military service members who call North Carolina home.
●  Launches a new statewide program called the No Veteran Left Behind project which will, in conjunction with the North Carolina-based The Independence Fund, provide additional training for law enforcement to help improve interactions between first responders and veterans in crisis.
●  Expands access to lottery funds for schools in rural counties with $300,000 this year and $500,000 next year to each county for school repairs and renovations in order to help smaller, low-income counties that often have a greater need but lack the resources compared to urban school districts.
●  Adds Fayetteville State University to the N.C. Promise program (which already includes Elizabeth City State University, the University of North Carolina at Pembroke and Western Carolina University) which guarantees $500 in-state tuition per semester.
●  $75 million for a new Brody School of Medicine at East Carolina University.
●  Provides nearly $1 billion toward disaster relief and flood mitigation for hard-hit areas of hurricanes and other natural disasters with $412 million of this amount for immediate use and the remaining $380 million will be put in reserves for future natural disasters.
●  Allocated $10 million to expedite testing and clear the rape kit backlog at the State Crime Lab.
●  Provides nearly $30 million to combat human trafficking in North Carolina.

There is also money budgeted for pay raises for teachers, most other state employees and retirees, a new municipal wastewater system, local fire department search and rescue grants and PPP loan forgiveness in addition to infrastructure and health care.