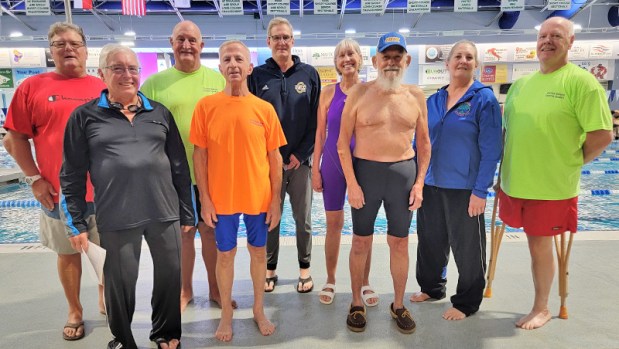 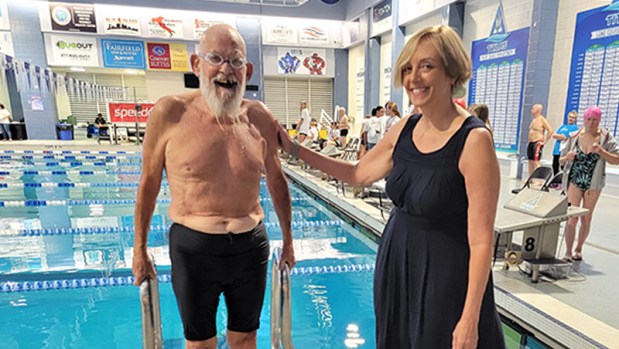 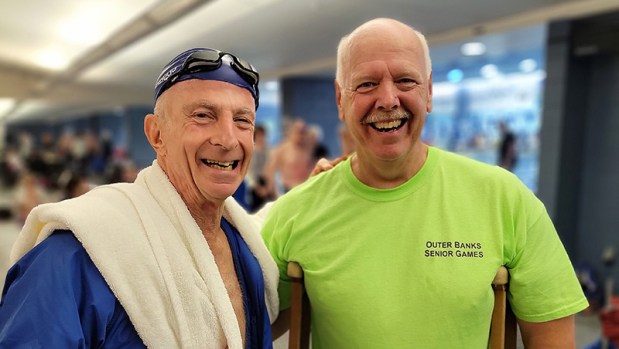 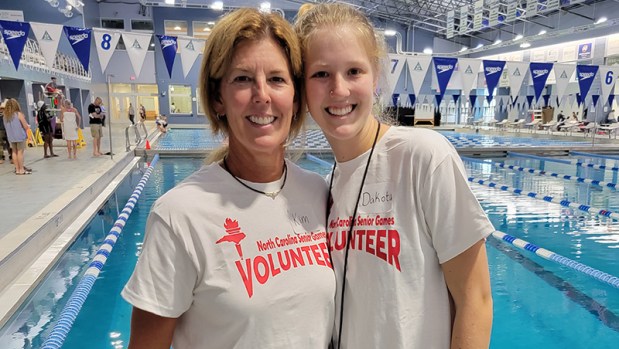 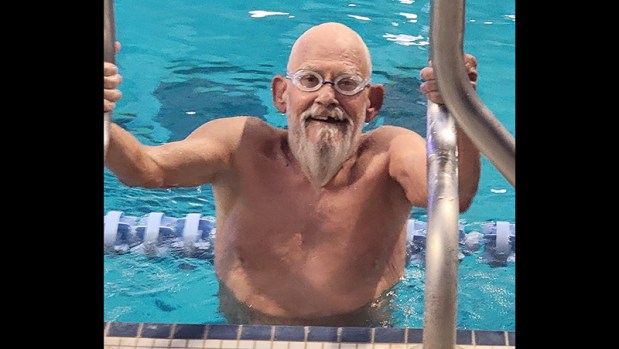 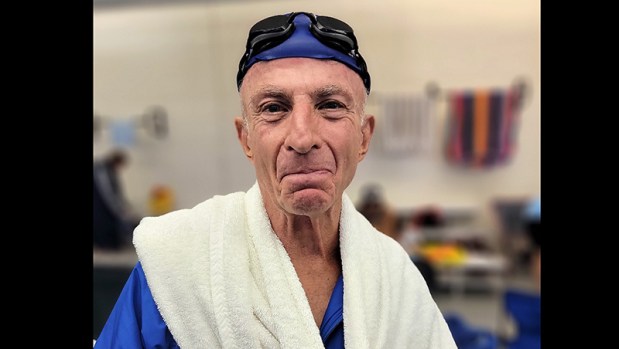 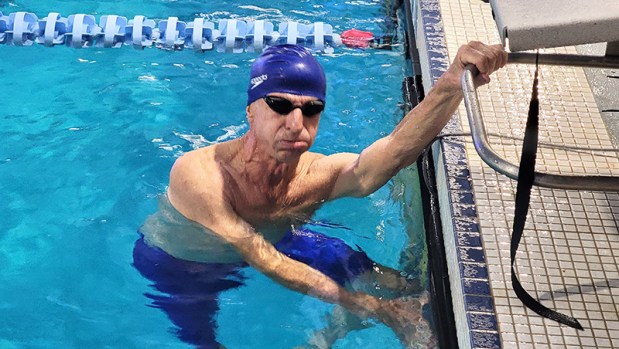 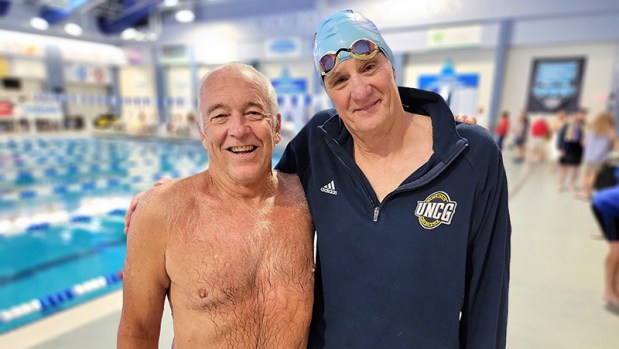 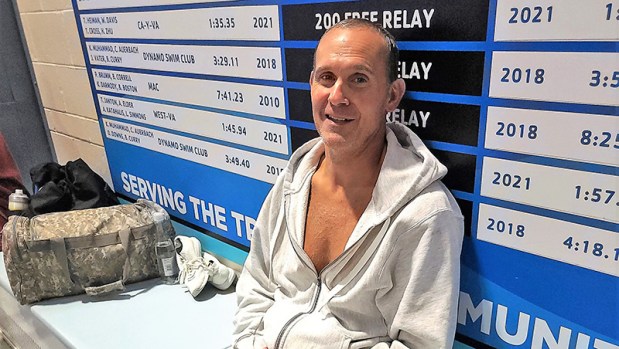 John Wallace rests in between heats. He swam hard before driving back to the beach to play a gig with his band, Trick Fly, on Saturday night. Daryl Law photo 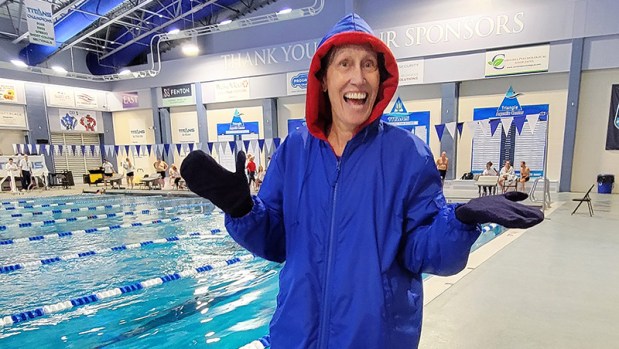 Kathleen Morgan models her winter gear poolside after swimming each of her events. Daryl Law photo 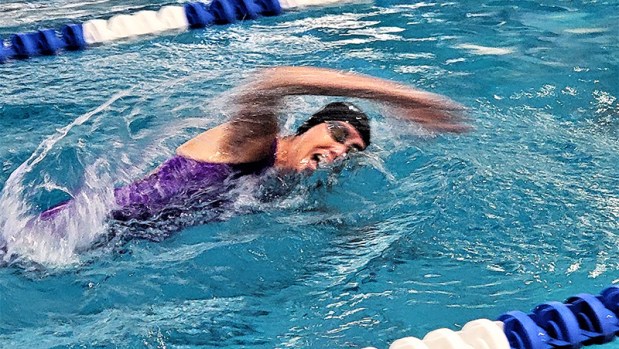 Kathleen Morgan pushes for the wall in a freestyle event. She represented Dare County with style and determination. Daryl Law photo

The event ran all day long and again Dare swimmers shined. Harry Schiffman, the team’s recruiter, said he was thrilled with the results.

“I think it was awesome what our team pulled off,” he said. “Even when we were missing key people.

“There’s so many stories there,” Schiffman added. “We want to say ‘thanks’ to Sam [Wills] and the YMCA for providing the facility and making the lanes available for us. And of course, [Dare County] Adult Services for making this happen.”

One of Schiffman’s recruits, a “fast” swimmer, said he found himself running out of air after just one lap while practicing.

In an email message recently, the swimmer told Schiffman that he had a heart condition and that Schiffman saved his life. The recruit is either in the process of getting triple bypass surgery or has already had it, Schiffman noted.

“I pestered him to swim, but he had shortness of breath,” he said.

“Health is the goal,” he said. “Camaraderie, competition, fun and health benefits is what we get out of it.”

Wills is the senior program director at the Outer Banks Family YMCA Nags Head, which most people consider the home pool of the Dare swimmers.

Another swimmer, Lloyd Minerich was also sidelined at the Cary swim meet but was suffering from the after effects of COVID, mainly brain fog, he said.

“His wife Lisa didn’t swim too much [leading up to the meet], but still did well,” Schiffman said. “Brooke Kirk had a really good time, faster than last year.”

That’s remarkable because Henzler only has one leg. At the meet, he chose not to climb onto the high blocks, so he simply dove off the pool edge.

He had a load of events and used his crutches to get to the start and the pool ladder to get out unassisted.

Henzler and many of the other swimmers rested in between events in chairs brought from home on the side of the competition pool. He admitted that relaxing was key to making it through the day.

Another neat story is Charlie Erwin, whose daughter Debbie Erwin Powell of Atlanta met him there. Erwin took first places and set records. His resolve to keep it all going is amazing when you consider he’s 90 years old!

Super speedy gold medal swimmer Robert Trivette, who helped get everyone ready for the away meet by holding a start, turn and finish clinic a week before the meet, saluted everyone. He posted a smoking time of 26.8 seconds in 50 free for his age group. He set several records but all of the final results weren’t available at press time.

“They’re all doing well,” he said poolside that day. “Charlie, you’re an Ironman!”

When Erwin’s events were complete, his family whisked him away to the East Carolina versus Navy football game in Greenville. The former Navy sailor said they didn’t get back to the Outer Banks until Sunday at 1:30 a.m.

Trivette thanked Schiffman for being the “glue” of the group and perhaps the key to the team’s success.

“A lot of it is Harry’s enthusiasm and his commitment to keeping people involved,” he said. “He’s encouraging, he’s really good about that.”

Two more athletes who thrived at the meet were “K.E.” and Kathleen Morgan. The husband and wife team spend nearly every morning swimming side by side at Nags Head “Y.” They take it seriously and Kathleen also swims in the masters sessions at 5:30 a.m. some days.

K.E., who likes to joke around a bit, gave a prediction on his races.

“I’m gonna start out slow and go slower,” he said with a grin.

For races that start off the blocks, swimmers need to grab a big breath of air and kick as hard as possible to go as far as they can underwater, which typically is faster that on top. Just looking at the swimmers racing nearby made K.E. belt out another one.

“Feels like somebody pulled the energy plug,” K.E. mused.

All the while, in the pool, Rick Jones wins his heat by leaps and bounds.

Several other super fast swimmers who excelled were John Donlan, Greg Florence, Trivette and John Wallace, who left after his events to get back to the beach to play a gig in the band, Trick Fly.

By the way, he’s a butterfly expert and swims this hardest stroke everyday during his 7 a.m. workouts.

For all of the results with times, go to ncseniorgames.org/results-records-sf.