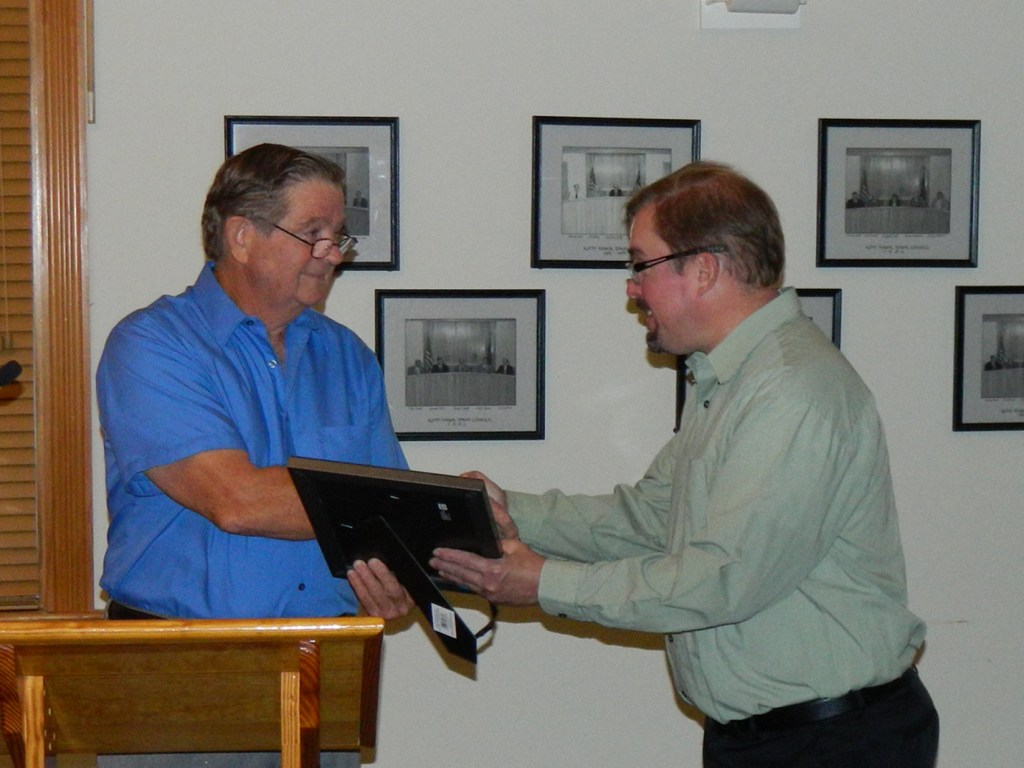 During the August 5 Kitty Hawk Town Council meeting, Mayor Gary Perry, left, presented Donny King with a certificate of appreciation for the work King and his Better Beaches OBX volunteer organization has performed during the past two tears planting beach grass and sea oats on the oceanfront and at the Moore Shore Road Living Shoreline Project. Philip S. Ruckle Jr. photo

Addressing a slightly larger than normal regular council meeting turnout, Mayor Gary Perry opened the session with a brief announcement that it appears Kitty Hawk is not immune to the potential for social media unrest and workplace violence and that visitors to town facilities will likely notice changes to access to staff working areas by the public.

“The people now behind limited access entrances are the same caring, responsible public servants you have always known,” said Perry. “They continue to serve as before, but their safety is paramount and the liability too great to ignore.”

On a more positive note, Perry then presented Donny King with a certificate of appreciation for the work King and his Better Beaches OBX volunteer organization has performed during the past two years. Perry said the group planted more than 100,000 sprigs of beach grass and sea oats on the oceanfront sand dunes, as well as planting some 7,000 marsh grass plants at the Moore Shore Road Living Shoreline Project.

Public Works director Willie Midgett added that the grass plantings by King and his volunteers have helped stabilize the dunes.

According to King, there are more than 200 Better Beaches OBX volunteers, often working on their lunch breaks planting grass and sea oats on sand dunes all along the Outer Banks. In May, the group was part of the Carolina Panthers’ annual “Keep Pounding” day. Ten teams in groups of four each planted sea oats along a full mile of Kitty Hawk oceanfront.

In the second presentation for the evening meeting, Ben Cahoon with Cahoon and Kasten Architects provided an overview of plans for a future Police Department on four lots at 4902 North Croatan Highway. 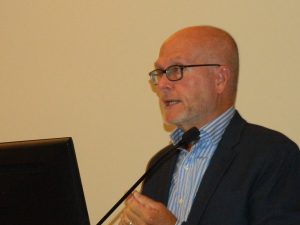 In April, council asked for a study and plans to determine future police and fire needs for the north end of town. Not long after Dare County EMS made known its desire for a substation in the same area.

According to Cahoon, initial plans call for a larger police department with a public reception area, holding cell, storage garage, training room and secure parking area behind the building.

A separate fire and EMS building to the south would provide a three apparatus bay, training room, sleeping quarters, bathrooms and office spaces. 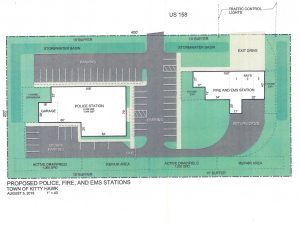 Cahoon advised that at this stage of the project there were too many variables involved to have a specific cost and it was best to talk in cost ranges. He recommended pre-engineered buildings with the Police Department running between $1,239,700 and $1,593,900 and a cost range of between $495,000 and $693,000 for the fire and EMS substation.

Each structure has room for future expansion.

During discussion, Mayor Perry was quick to point out that while Dare County EMS was included in the study, the project was strictly for future planning and that there are no plans to build anything anytime soon. He added that there have been no discussions between Kitty Hawk and Dare County on any cost sharing or project financing even though it includes room for an EMS substation.

Perry went on to explain that the current police department site has flooded at least twice and possibly at other times when it was a post office. The addition of a fire department substation comes due to severe rain events creating a moat around the main fire station. A substation on 158 would provide access to a work station on higher ground and comply with requests by the state fire marshal for a second station.

Town manager Andy Stewart advised that there is $325,000 in a reserve fund for construction of a police station and that he would look at options for building the new facilities and report back to council.

In other business, council voted to amend its town code to prohibit beach access parking between midnight and 3 a.m. at Byrd Street, Lillian Street and the Kitty Hawk Bath House at 3840 North Virginia Dare Trail, selected Craig Garriss to be the town representative on the Dare County Complete Count Committee and changed Board of Adjustment alternate member Natalie Smith to a regular Board of Adjustment member and designated Timothy Fish as the board’s vice-chair. Smith’s position change now leaves a vacancy for an alternate.

Stewart also noted that the next council meeting is Monday, September 9 at 5 p.m.