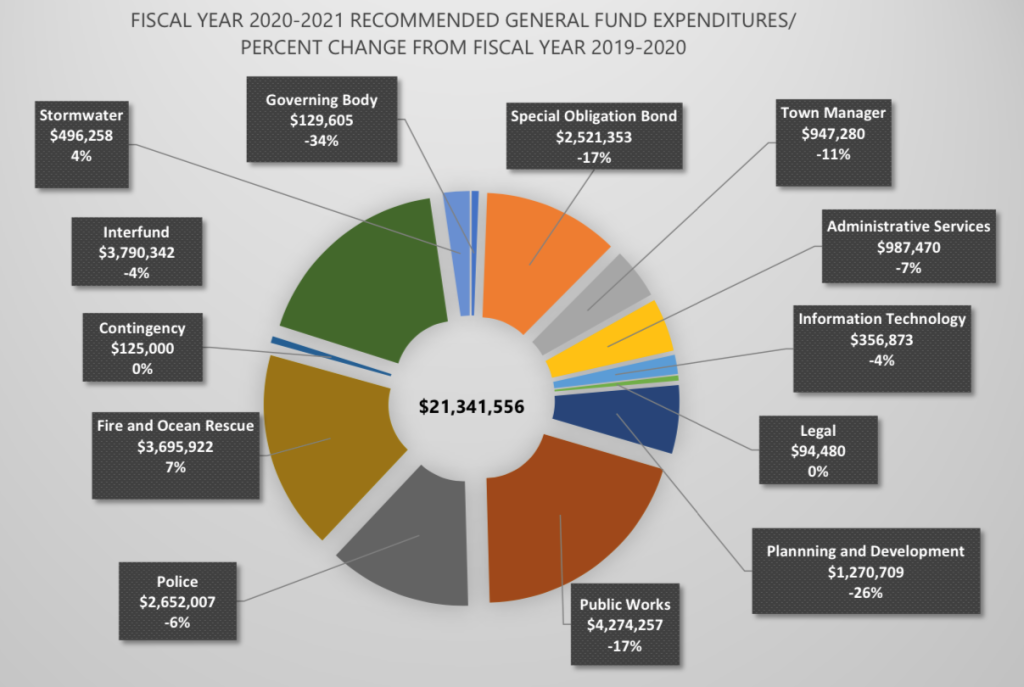 At their budget workshop on May 29, the Nags Head Board of Commissioners explored the previously presented $21 million budget for fiscal year 2020-21.

The board must adopt their fiscal year budget by June 30. There were several aspects of the budget that commissioners wanted untouched in terms of funding, such as with public works.

“I’m kind of a blue-collar person, and blue collar are essentials,” said commissioner Renee Cahoon. Commissioner Webb Fuller was on the same page: “Don’t mess with public works . . .  don’t cut at any level that makes the town less than what it is.”

Mayor Ben Cahoon asked to revisit the removal of the $50,000 master plan for public works towards fall. “Those facilities are really bad shape, something needs to be done,” he said.

The planning and development as well as public works portions of the budget took a hit, suffering a 26% and 17% reduction from last year’s budget. Fuller’s concern was that Nags Head would get “too far behind the curve that we can’t catch up.”

The commissioners agreed to fund a part-time bathhouse cleaner for the time being to keep up with sanitization due to COVID-19. In other areas, the board was wary about budgeting funds.

“How much work are we going to have for a principal planner with all the delay in projects?” inquired Renee Cahoon. Fuller sided with Cahoon. He felt the planning department was “overstaffed” compared to other departments. “I’m not sure whether a couple positions can be combined into one,” he said.

Mayor Pro Tem Mike Siers questioned the amount of expenditure in advertising. He reviewed the approximate $10,000 spent by the town on advertising last year and felt that the amount was high. Ogburn said that staff would budget close to “the actual money spent, based on historic averages.”

Commissioner Kevin Brinkley addressed the shooting range in Nags Head Woods, which Nags Head and other municipalities pay a yearly rate to use.

The town pays $1000 per year to use the range; if not all expenses are used that year, the money rolls over into the next. Brinkley wanted to ensure that the rolled over amount stayed in a separate fund for the range rather than being funneled into the general fund.

“The money needs be used for maintenance repairs, upgrades . . . it always comes out of that account rather than police department or fund balance,” Brinkley noted.

In a matter of opinion, Fuller said he was willing to use money from the fund balance to balance the budget. “I think there’s an opportunity to use the fund balance,” he started, “just looking at the numbers and knowing where we are, I’m at a point where I think I’m okay [with using the fund balance].”

The follow-up questions from the board will lead to further adjustments to the budget by Ogburn and staff. On June 3, the board will conduct a public hearing to take comments, questions and concerns from residents regarding the budget.

Ogburn said another workshop is tentatively scheduled for June 10, with a scheduled adoption date of June 17.