Discussion held on placement of county ambulance in Duck 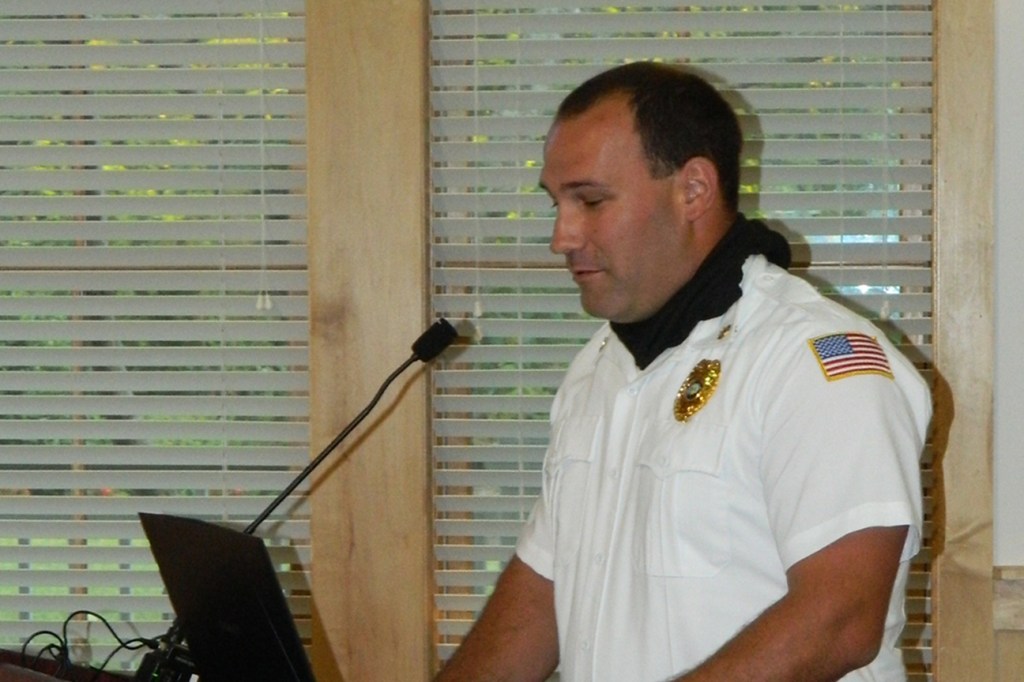 Duck Deputy Fire Chief Trey Batschelet presented an overview of a proposed new fire ordinance at the June 3 Duck Town Council meeting. Batschelet said the goal was for it to be easy to read and easy to locate. Council set a July 1 public hearing for the ordinance. Philip S. Ruckle Jr. photo

Included in the June 3 Duck Town Council meeting were two public hearings, the review of a new fire ordinance and a lengthy discussion on details of a possible pilot project for the placement of Dare County EMS ambulance in Duck.

Without any formal presentation, council held a brief public hearing on the proposed $10,233,661 budget for fiscal year 2020-21.

According to town manager Chris Layton, multiple factors were considered in reaching a proposed budget amount, which is based on an 8.15 percent decrease in revenues from the current amended budget.

Duck, in addition to other Dare County municipalities, is expecting lower revenues, investment earnings and fee incomes due to recent travel restrictions imposed due to the COVID-19 pandemic.

Council voted to hold a 3 p.m. June 10 work session with another look at it during the 1 p.m. June 17 mid-month meeting. A final budget adoption is required to be in place no later than by June 30, 2020.

The second public hearing led to the adoption of an Outer Banks Regional Hazard Mitigation Plan.

Community development director Joe Heard explained that a hazard mitigation plan helps identify measures and methods to protect people and property from the effects of natural and human-caused hazards. Adoption of the plan also maintains eligibility for mitigation funding and disaster relief assistance from the Federal Emergency Management Agency and to help improve Community Rating System scores with the goal of maximizing flood insurance rate reductions.

Heard went on to say that in 2015, North Carolina encouraged an eight-county regional plan. While having a plan covering a large area proved good for the state, the Outer Banks has needs that are different than those of inland areas. In this case, a 36-member committee worked 15 months to develop a more local plan. The result is a 648 page document that has 28 plans covering different levels of mitigation strategies from low level concerns like droughts to more pressing issues like hurricanes, floods and wildfires.

In response to at least one public question, Heard confirmed that the plan encourages and supports a mid-county Currituck bridge.

The motion to adopt passed with unanimous approval.

There was also unanimous approval that additional information is needed about a pilot project placement of Dare County EMS ambulance in Duck.

Layton said earlier this year he was contacted by Dare County EMS and informed of requests that the county establish an EMS station in Duck. He and Duck Fire Chief Donna Black met with the county manager and Dare County Emergency Medical Services director Jennie Collins to discuss the issue, but to date there have been no details provided.

During the evening’s discussion, Nancy Caviness said she was unaware of the extent and nature of the discussions regarding the ambulance and concerned that protocol was bypassed.

Rob Mooney said he thought an ambulance in Duck was a no-brainer, to which Caviness responded that here concern was not about a pilot project, but about making decisions without the experts. She explained also that she wanted some experts in the room that can say why staging an ambulance in Duck solves a problem.

Layton and Black both confirm that even prior to recent COVID-19 restrictions, there is not enough room for an ambulance and crew at the current fire/police station. There are also no county plans to put an ambulance in Duck anytime in the near future, only an agreement to be part of a pilot project with no details provided.

As the discussion continued, Mayor Don Kingston said they might be confusing short term planning with long term planning, but that there was a large void of information being provided.

“A pilot is a great idea,” said Kingston, “but we need to know what is involved, what is expected and what will our commitment be.”

After Chief Black suggested having EMS Chief Collins attend a meeting with council to talk about her department, Kingston asked Layton to move forward with getting something together in the next couple of weeks.

In other business for the night, the consent agenda was approved with May 6 council meeting minutes and budget amendments moving $140,791 from FEMA grants and Beach Nourishment Capital Reserve accounts to Building Repairs and Maintenance, Sanitation and Beach Protection Professional Services along with $29,500 also transferred from Contingency to Legal Professional Services and Sanitation to cover end of year costs.

With a number of fire related items pulled from various different parts of town code, Batschelet said everything was consolidated into one section designed to be educational and functional.

“It needed to be streamlined,” said Batschelet. “The goal was for it to be easy to read and easy to locate.”

Council agreed to set a public hearing for the July meeting.

Under new business, the town manager was authorized to purchase two new vehicles – one for the police department and one for the building inspections department – using revenues from the sale of surplus vehicles and equipment.

Layton explained that recent public auctions resulted in $68,899.45 of revenue with $24,322.36 of that amount going back into the Police Department budget for the purchase of a law enforcement vehicle. A building inspector vehicle is also needed and both would serve as supplemental vehicles for travel use when others are not available.

Council then recessed until 3 p.m. on June 10 for a budget work session.