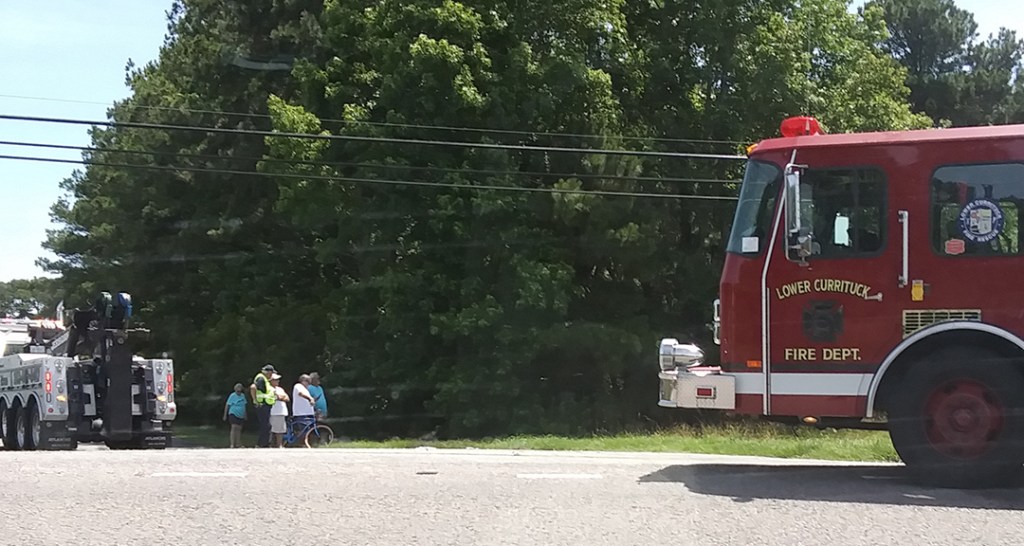 A two-vehicle collision on US 158 in Currituck near Powells Point brought traffic to a standstill Monday.

According to North Carolina State Highway Patrol Sgt. D.W. Weaver, a 2017 International truck delivering mattresses and bed frames from Norfolk, Va. to the Outer Banks crossed the center lane and struck a white 2005 GMC Yukon traveling in the westbound lane. The collision occurred at around 10:32 a.m.

When the truck operated by Vincent Avery, 39, of Norfolk, Va., crossed the center lane, Pamela Alphin, 64, of Zuni, Va., attempted to veer her GMC right to avoid a collision with the eastbound tractor trailer. On impact, the GMC spun around and overturned onto the north shoulder of Caratoke Highway. The International continued northeast across the westbound lane at Pinewood Acres Drive and overturned onto the north shoulder where, upon impact, the fuel tank ruptured and the fuel ignited.

Avery and a passenger in the truck were able to get out and were taken by Currituck EMS to The Outer Banks Hospital in Nags Head for treatment of minor injuries. Alphin, alone in her vehicle, was flown to Sentara Norfolk General Hospital by Nightingale helicopter.

Weaver said Avery was charged with careless and reckless driving and with crossing the centerline of a highway.

“It appeared the (truck) driver straightened out the curve,” said Weaver. “There is a little turn right there and he went straight ahead with no braking. When he went left of center, he crossed into the westbound lane and the collision occurred in the middle of the westbound lane. Miss Alphin, heading west in the inside lane, steered right to try and avoid him when he came into her lane. He struck her and she spun around and overturned as well.”

Highway traffic in both directions was affected.