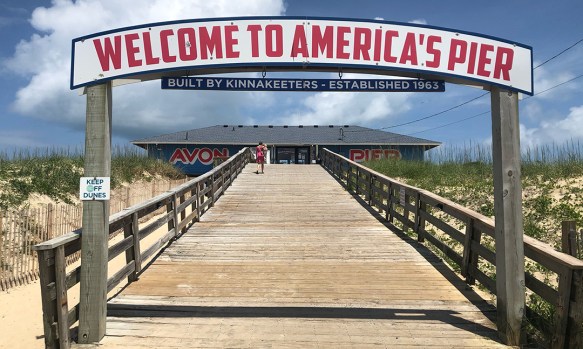 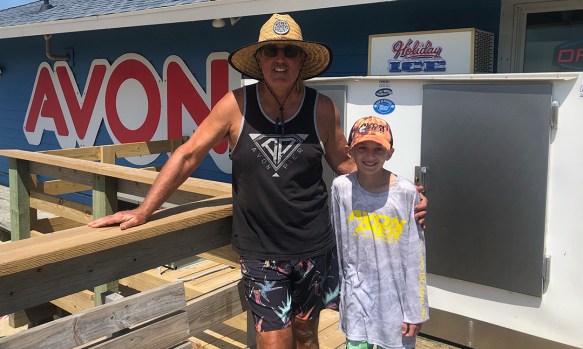 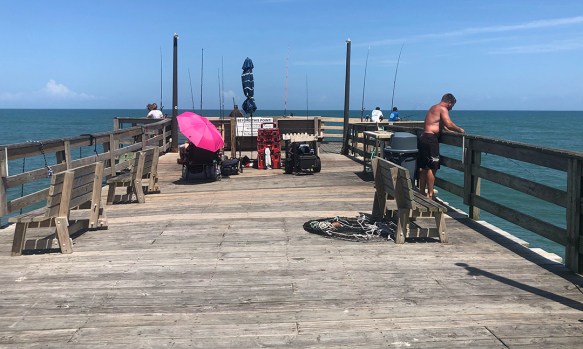 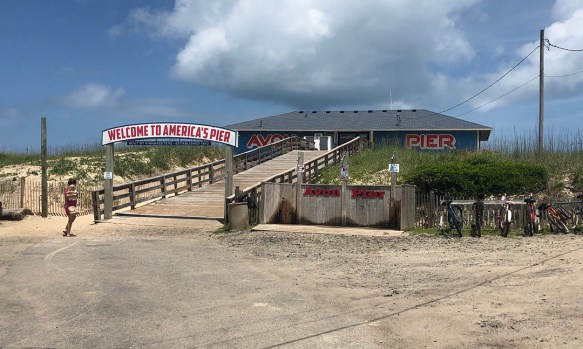 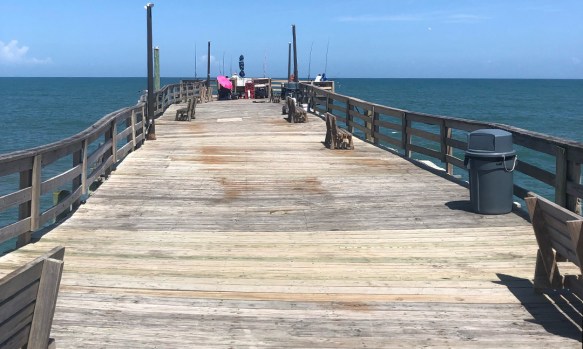 The wooden pier winds unevenly to a length of 665 feet, though it’s said that it was originally 1300 feet when it was built in 1963 by two brothers from Kinnakeet Village – the traditional name for Avon. “I’ve heard that it was the longest pier on the East Coast,” said Johnson.

“Every crook and bend tells a story,” said owner Joe Thompson. If it could, the southernmost pier in the Outer Banks would tell of the many storms it has endured, the thousands of visitors who have seen the sunrise atop its pilings and innumerable stories of that one great catch.

“The thing about piers is that they’re disappearing. Wooden piers – they have a lifespan. They’re just like everything else, they’re impermanent. Our goal is to prolong and extend that lifespan. We do our best to make it as best as we can for as many people as we can,” Thompson said. In 2020 the pier underwent extensive renovation to repair the damages from Hurricane Dorian and a series of nor’easters.

For residents of the village of Avon, the pier is integrated into community life. “It’s more than just a pier, it’s a community access. In that in most areas, there are a number of public accesses to the beach. In Avon, there are no accesses. This is the only place you can get to the beach unless you have a house right on the beach,” Thompson said.

“This is where the locals come,” he continued. Some come to fish, some to surf, others come to play at the beach. Thompson offers parking and he built a playground for the community children and sidewalks big enough for the youth of Avon to ride their longboards. “We’re open and transparent to the youth,” he said. “This is a safe place for the youth to come. And lots of kids end up working for me.”

Thompson owns Koru Village, the neighboring property that has a beach club with an oceanfront pool and performance theater, as well as Spa Koru, Pangea Tavern and Vidant Medical Center. Every Thursday through August 12 visitors can attend the popular Beach Summer Concert Series. Koru Village is currently undergoing construction for a 26-site, full hook-up RV park, expected to be completed in the fall or next spring, depending on the availability of supplies.

“The fishing’s really good,” said Johnson. “In the fall and the spring the fish migrate here from the north and the south and they go right by here.”

After almost six decades, the Avon Pier still draws a crowd, both young and old.

Eleven-year-old Kyle McGann visited Avon Pier on his birthday with his father, Tim. Kyle was greeted by Thompson with a hug and an invitation to pick out a free hat for his birthday. The McGanns have been coming to Cape Hatteras from Frederick, Maryland every summer for years. “I remember the first moment when I caught a fish on this pier and I fell in love with this structure,” said Kyle.

Kyle built a to-scale model of the Avon Pier in his basement and according to Thompson, he knows everything about the pier, its history and what’s biting. “You can throw some Got-Cha plugs and catch some pretty good blues early in the morning. Later in the day with a bigger pin rigging you can catch king mackerel and cobia,” Kyle said as he strolled down the pier, chatting about tournaments the pier hosts in the fall and pointing out recently replaced planks after tropical storm Arthur. “There have been a few changes but it’s still the wonderful Avon Pier,” he said.