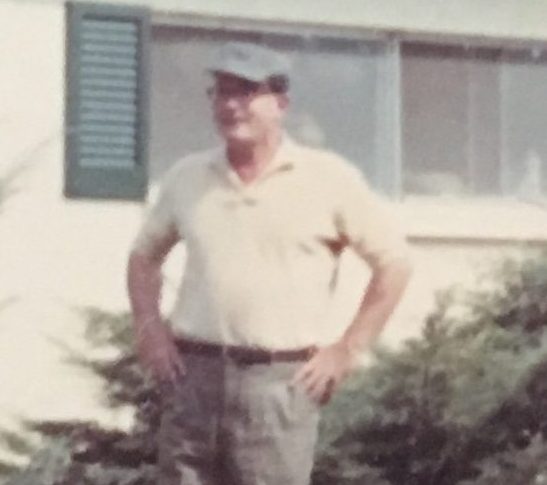 Dr. Linus Edwards in front of his Mother Vineyard home in 1968.  File photo

Hours before dentist Linus Edwards of Manteo put his .22-caliber pistol to his head on Valentine’s Day, 1971, he left a set of dentures one of his friends, W.W. Harvey Jr., the town’s general practice doctor, had ordered. The boxed dentures, without a note, were placed neatly on the Harveys’ dining room table.

The Harveys were at a Valentine’s Day party at the home of friends. The Harveys had left their house unlocked, as was sometimes the custom at that time in their neighborhood. Dr. Harvey’s widow, Margaret Harvey, told me recently that she’d always felt that “leaving the dentures was Dr. Edward’s last obligation that he wanted to complete before he left this world.  This … says a lot about Dr.  Edwards.”

Ohers say that last act simply spoke to Edwards’ detail-oriented personality, especially since, hours later, he requested that Dr. Harvey, among others, respond to his house as he prepared to kill himself.

Edwards, a Durham native and Army dentist who’d served as a lieutenant colonel, was brilliant, a man who enjoyed working crossword puzzles and talking of his membership in Mensa, an organization of people with high IQs. He was also a violent drunk known to beat and demand loyalty from his second wife, Dotty Fry, and be intensely jealous of her. In the pre-dawn hours of July 1, 1967, Edwards’ mix of drunkenness, rage and jealousy may well have led him to fatally strangle Brenda Joyce Holland, the makeup supervisor at The Lost Colony outdoor drama on Roanoke Island, mistaking Brenda for his wife and dumping her body in the Albemarle Sound.

I hope the SBI will finally close this case, for the sake of Brenda and her survivors, whether that means the SBI says the killer was Edwards or someone else. Closure is the most important thing. But for now, here’s the case against Edwards.

It was almost as if they might have privately believed that Edwards was the killer.