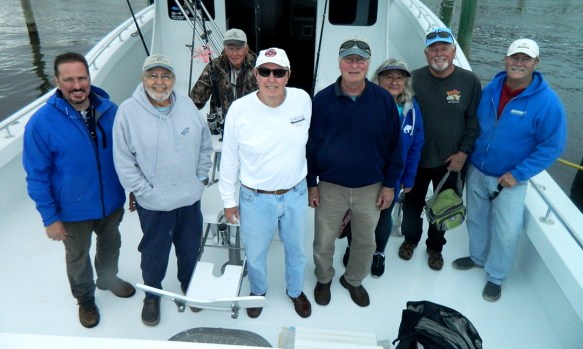 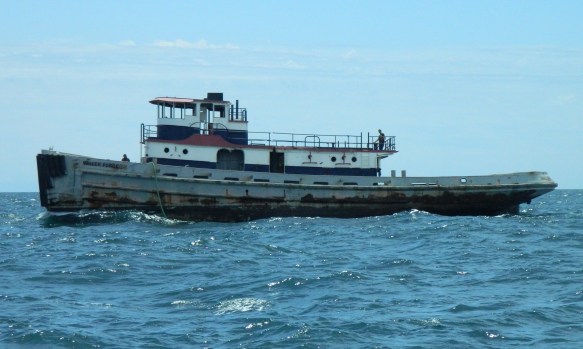 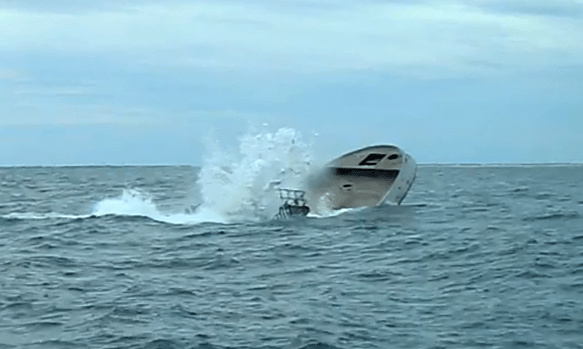 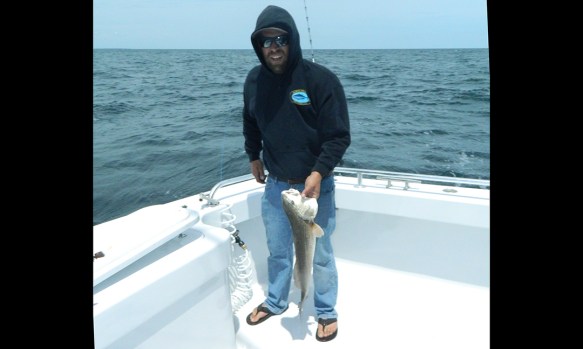 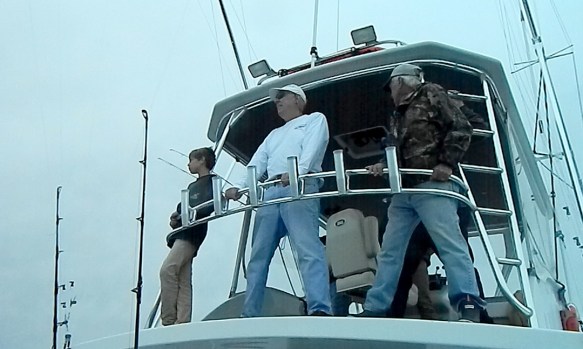 There were plenty of wind and waves off the coast of Hatteras Island on Friday, May 7. Near perfect weather for sinking a boat.

Known around the world as the Graveyard of the Atlantic due to the abundant number of ships these coastal waters have claimed, this time a vessel was submerged on purpose.

“This is a project of the Outer Banks Anglers Club,” explained club member Dick Parker. “We are building a new artificial reef off the coast of North Carolina about eight miles south of the Oregon Inlet buoy and three miles off the coast.”

On board the Country Girl, a Carolina-style charter boat out of Pirate’s Cove Marina in Manteo, Parker and six other club members were taking an hour-long ride out into the Atlantic to watch workers from Marine Fisheries and Coleen Marine, Inc. in Virginia sink the tugboat Valley Forge.

The project includes building a reef off the coast to attract game fish, which will in turn improve the area’s fishing.

A North Carolina Division of Marine Fisheries webpage indicates that Marine Fisheries maintains 42 ocean artificial reefs from about half a mile to 38 miles from shore, all within easy reach of inlets up and down the coast.

“This is the fifth artificial reef we have up here,” Parker continued. “Three are north of the inlet and there is another south of the inlet.

This reef site is a circle some 3,000 feet in diameter covering about 162 acres. So far, two other tugs and 7,250 tons of concrete pipe have been placed at the artificial reef site, designated AR-165. In January 2020, the American, an 88 foot tug, was sunk there and the following April, the 104 foot America was sunk. 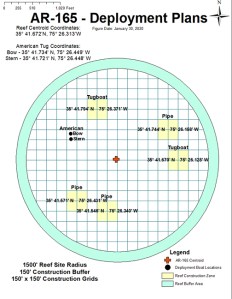 The AR-165 reef site is a circle some 3,000 feet in diameter covering about 162 acres. To date, three tugs and 7,250 tons of concrete pipe have been placed at the artificial reef site. Courtesy Outer Banks Anglers Club

Parker said money to purchase the tugs was from a $882,000 North Carolina Division of Marine Fisheries grant to build the new reef. Money for the grant was raised through the sale of recreational fishing licenses. There were also donations to the project and a $20,000 contribution from TW’s Bait & Tackle. The club paid $115,000 for the Valley Forge.

Gutted and now a shell of a vessel, the Valley Forge started life in the mid ’50s. Worth less than $100,000 in the late 90s, about $15 million was spent to outfit it as a fire tug with a new engine and modern, costly and complicated electronics and equipment. The conversion eliminated its excellent handling characteristics and it was used mostly in holiday showings at Southport. It was sold as government surplus in 2012.

“This has been a long-standing project of the club’s Artificial Reef Committee headed by Dick Parker and Brian Forbes,” said club president Mike Ross.

Parker said the idea came after seeing an article in The Coastland Times several years ago. He was reading about people sinking ships, tugs, concrete and other things to make artificial reefs.

“All those reefs were located south of us,” Parker explained. “They were down around the Morehead and Wilmington area and I thought that we needed to get in on that.”

After learning that Marine Fisheries was granting money, Parker and Forbes got together and applied for a grant.

“It has taken a long time,” explained Parker. “Permits held us up for more than a year. State permits were not too bad, but we finally ended up getting Senator Burr’s office involved to help us with the others.”

“The reef helps promote good fishing,” said Forbes. “Just like the movie Field of Dreams, ‘if you build it they will come.’ That’s exactly what happens with a reef. If you build a reef out there the fish will show up.”

Forbes went on to say that fish like structures, it provides protection for them; algae, mussels and barnacles grow there making it an attraction for fish.

“They find it,” added Forbes. “I don’t know how they find it, but they do. They tell their friends and they all show up.”

Forbes said the first tug boat went under in January last year and the second in April and by June he was catching triggerfish there.

Fish are still there. As the Country Girl meandered around the reef area while workers pumped sea water into the Valley Forge, crew members Banks Foreman and Lee Collins hauled in several black sea bass and red drum.

Then, after what seemed an eternity, Valley Forge eventually sank lower in the water and once the deck reached the water line, she submerged and went under in a matter of seconds.

“This completes the project we contracted for,” said Forbes.

Forbes added that he hopes there will be additional concrete deposited this summer. While not part of the original contract, there could be several more tons of concrete available from other sources. None is expected from the old Oregon Inlet Bridge since the channel is too shallow to haul out debris. Club members said all that old concrete will go south toward Wilmington.

Parker said there may be additional concrete pipe, reef balls and a caisson door added to the reef site in the near future.

“There are other things that could go out there in addition to what the contract calls for,” said Forbes. “Would not hurt to build another reef here. There are tons of reefs down near Morehead.

“Several concentrated in that area, so there is no reason not to expand. I would not mind having more reefs here. And once the word gets out, these reefs are sure to attract some people.”

No doubt there will be discussion on this event at the next Outer Banks Anglers Club meeting at 7 p.m. on May 24 at the Kitty Hawk Pier.

Coordinates of the various tugs and concrete pipe have been recorded and NCDMF will conduct a final site survey this summer to determine and publish the exact coordinates.