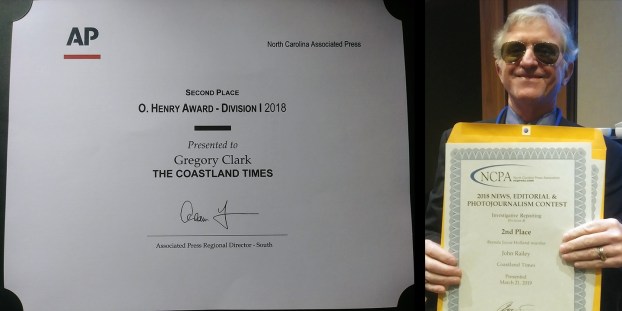 John Railey won second place in the NCPA contest for his work on the Brenda Joyce Holland murder case in the Editorial Investigative Reporting category. The 10-part series ran in the Times in 2018 and all parts are available on thecoastlandtimes.com. (See links at the end of this article.)

In response to Railey’s first two columns on the case, North Carolina’s State Bureau of Investigation assigned a cold-case investigator to the Holland slaying. Railey secured, from a source, the original, classified SBI file on the case. That file, plus his own interviews, revealed numerous blunders, ranging from a necklace from the victim’s body not being preserved as evidence to deferential treatment being given a main suspect.

Also presented at the NCPA banquet were the awards for the 2018 North Carolina Associated Press News Excellence Contest. Gregory Clark won second place in the contest for the O. Henry Award – Division I for his column “Remembering the November day that changed everything.” Clark’s remembrance of the day that President John F. Kennedy was assassinated in 1963 is a column that thoughtfully expressed first-hand how that day felt for Americans.

Remembering the November day that changed everything – by Gregory Clark

The Manteo Planning Board has taken the first step in updating the town’s 20 year plan. The board voted to... read more